Decisive action in the face of failure – case study #1 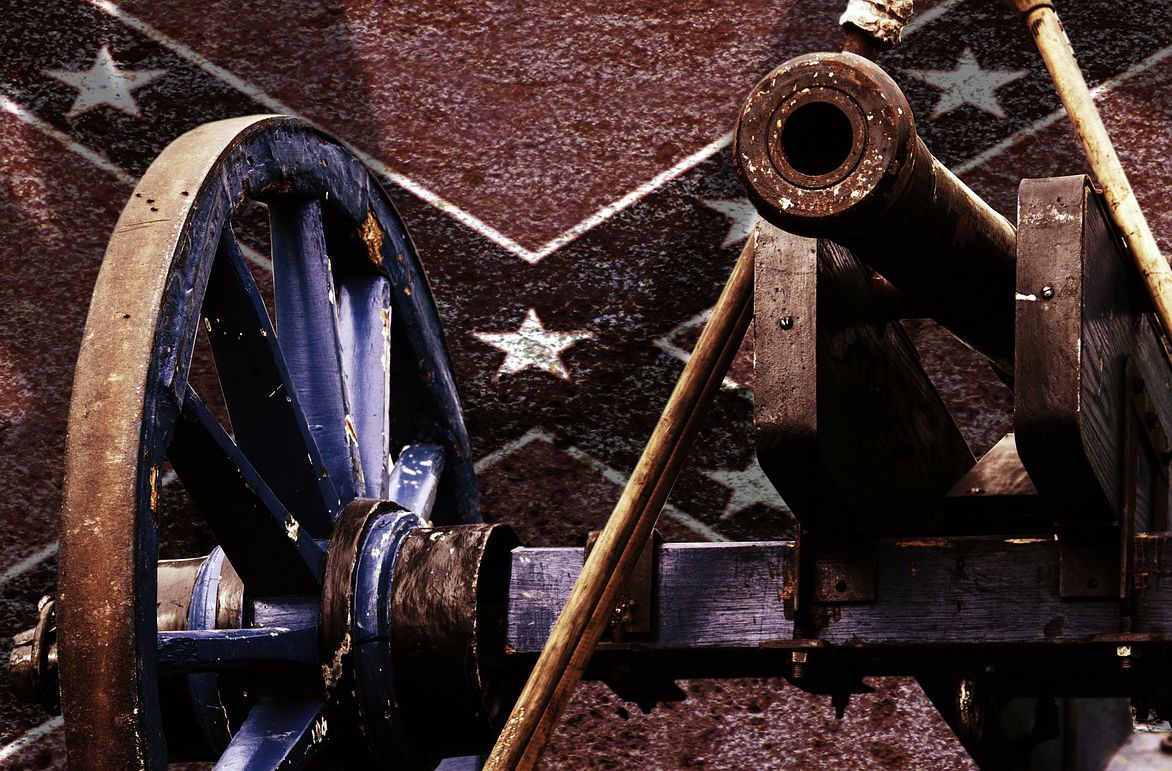 Welcome to case study #1. Like all cases found here, this one is based on real events. After you’ve finished reading, you’ll understand why and how taking action in critical moments is paramount in resolving any crisis and turning disaster into victory.

Today we tell the story of the battle of Little Round Top. This engagement was a part of a bigger conflict fought in the fields of Gettysburg in 1863 between the Union and the Confederacy. We are at the height of the American Civil War where the future of an entire nation is being decided.

The day is July 2, 1863, the middle of a gorgeous Pennsylvanian summer. It is the second sunrise over the battle of Gettysburg. General Robert E. Lee’s army of the Confederacy is being countered by the Union’s Army of the Potomac in its invasion of the Northern states. The previous day saw the Union’s forces being beaten and driven out of the town and to the local high ground. Now, emboldened by the initial success, the Confederacy pushes its advantage and continues to attack the Union’s defenses (for more details consider this good read or an even better watch).

After the initial skirmishes of the day, the Northern troops consolidate their defenses. They form a line on the slopes of Little Round Top and await the final Confederate assault. The Southerners are eager to plant their flag on the top of the hill but they know how difficult the fight ahead of them will be. They are tired after marching over 30 km that day and their canteens rattle empty. They will be fighting an uphill battle against the determined and hardened Union troops. However, they are confident in their leadership and the tactical genius of general Robert E. Lee, which has brought them this far. 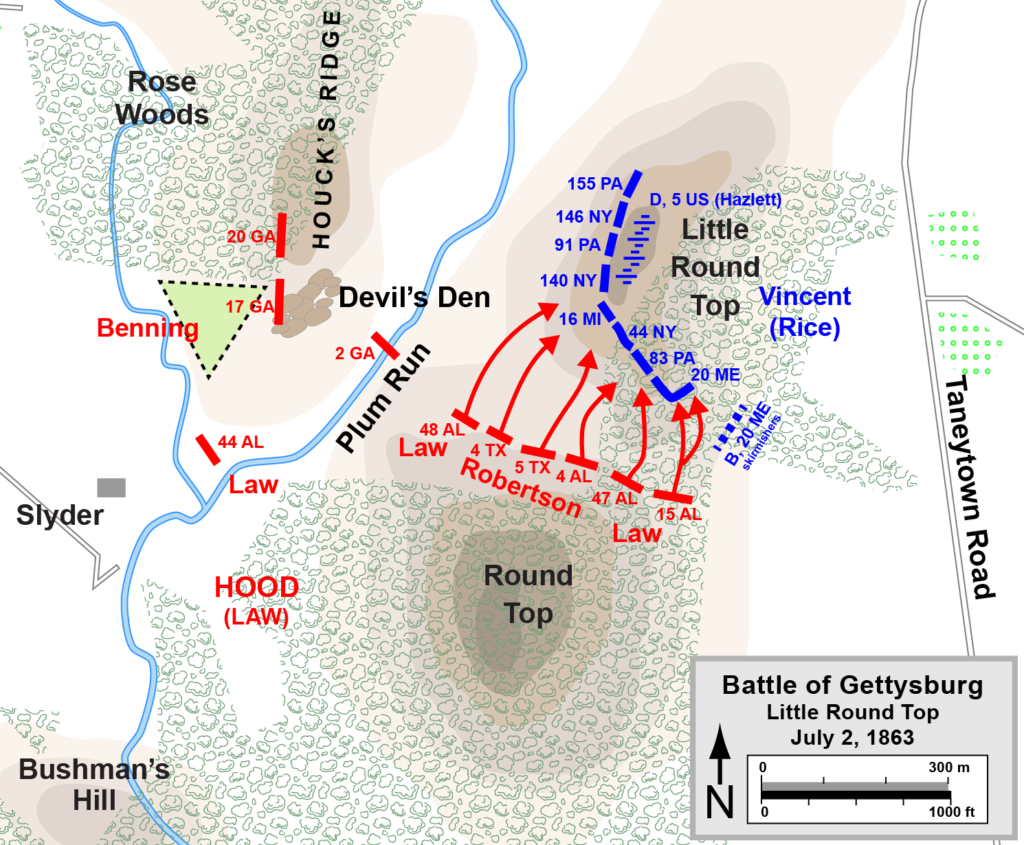 After the order to attack is given the Confederates push towards the center and the left flank of the Union line. This part of Little Round Top is more abundant in vegetation and provides cover for the Southern advance.

Once within rifle range, both sides open murderous fire. The fighting is fierce and brutal. Officers scream orders over the sound of gunfire and screeching Confederate battle cries. Men frantically reload their rifles. Some cower while others stand defiant and without regard to the heavy lead bullets whistling around them. The battlefield is quickly covered in smoke and the screams of the dying. The Union’s center begins to buckle and its left flank is faced with repeated heavy assault.

The most heated part of the front is at the very end of the Union line manned by the soldiers of the 20th Maine (20 ME, see the map). These men know that holding the line is crucial to the success of the defense and the survival of the Army of the Potomac. Should they lose their post the entire Union line may be flanked and attacked from the rear. Thus, they hold their ground, repulsing one attack after another from the 15th Alabama (15 AL).

As the men of the 20th Maine fight on, their officers make themselves visible and encourage further bravery and sacrifice. Among them is the leader of the regiment – Col. Joshua L. Chamberlain – a college professor and a military volunteer. Moving along the line and already suffering a leg wound he provides comfort and confidence to his men, while growing ever aware of how dire the situation is. With such an intense fire between both sides, the outnumbered 360 men of the 20 ME take casualties and soon run out of ammunition. They are forced to scavenge what they can from the dead and wounded. After 90 minutes of Confederate assaults their ammunition is gone.

Upon seeing his men out of ammunition and the next Confederate assault approaching Col. Chamberlain examines the situation. Any kind of retreat would endanger all of the Union forces and waste all of the sacrifice and effort so far. Yet, continuing effective fire is no longer possible and his men are on the verge of collapse.  Then again, after such intense fighting the Southerners must be exhausted and demoralized as well. He comes to a conclusion and gives the following order: Bayonets! Seeing his men ready and with blades on their rifles he continues with: Charge!

And so the men of the 20 ME run downhill, the bayonets in front of them, straight onto the Confederate line. With such an unexpected and momentous attack the Confederate line breaks. The Union troops turn the line while charging and pivot like an opening door. They sweep the South of the hill and end any further attempts on their positions.

The defense of Little Round Top was the turning point of the battle of Gettysburg. The action of Col. Chamberlain, his men and other Union troops along the line helped carry the day. For his actions, the leader of the 20 ME received the Medal Of Honor – the highest possible military citation. Eventually, he was the one to receive the surrender of general Lee in Appomattox, which marked the end of one of the bloodiest wars in American history.

History provides valuable lesson in many aspects of life, leadership notwithstanding. Modern work environments are not as dramatic or dangerous as Civil War battlefields and our stakes are not as high. This should make our job easier. Let’s see what can we learn from the battle of Little Round Top.

Leadership visibility. During the entire battle, officers on both sides were leading from the front. There weren’t hanging in the back, dropping in from time to time, checking how things are going. Instead they were always engaged. They were looking after their men, attended their military and psychological needs. While individually they couldn’t do much physically in the heat of battle, they contributed immensely to the morale of their men through their sheer presence.

This is what modern leaders need to do as well. When you have a fire to put out in your business, when your software is crashing in production, when your assembly line malfunctions, when clients are blowing up your phones, you need to be there. As your team struggles to contain the situation you can join them if you are technically fluent. If not, let them know you have their backs. Don’t bullshit and tell them the following: “Guys, we have a potential disaster on our hands. I’m on the phone/in my office pushing things from my side. Whatever you need to get things done, you tell me immediately”. Fairly obvious things to say, right? Unfortunately we don’t hear them often enough. I suggest you practice your lines and posture as I can guarantee you’ll need them.

Decisive action. Take a moment to put yourself into the mind of a Union soldier, expected to hold the line at Little Round Top with no ammo. What do you do when faced with such odds and with no means to fight? What options are left to the commanding officers at this point? Retreat? Surrender? Is your life worth saving the Union? In such crisis you look up to your leaders for answers. If you are the leader you must take action, unless you wish to see the imminent failure become reality.

It doesn’t matter whether Col. Chamberlain knew exactly or knew not what to do in his situation. The important thing is that he took an immediate and decisive action. He didn’t say “I don’t know” or “I need to check with my superiors”, or “I don’t care, just get it done”. The same goes for you, no matter what your position in the hierarchy is. If you must act now don’t wait until your leadership returns your calls, don’t say you don’t know what to do. Show initiative and make a decision. Whether it’s the right call or not, your peers will respect you for not being complacent and passive.

Transparent plans and operations. The sweeping charge performed by the 20 ME is often compared to doors opening. This kind of maneuver is difficult to execute and requires great timing and coordination. Col. Chamberlain would not be able to pull this off on his with his entire regiment. It was made possible by the skill and presence of mind of the remaining officers of the unit. Chamberlain laid out his plan to his subordinate officers in its entirety. This gave them the big picture of the action and allowed them to coordinate efficiently. They knew the responsibilities of each section of the line and that made them more capable of adapting to the rapidly changing situation.

If you tell your team to go to a certain point without explaining its purpose they will stumble on the first obstacle. Instead, give them the vision of your final destination, one that they can all subscribe to. Justify why you all should get there and what’s at stake. If you do that well you will see them mustering their creativity to navigate any issue they will find along the way as they will always know what the purpose of the whole endeavor is.

Do you want to practice these skills in a high intensity environment? If so, then sign up for the WARBAND combat based training.

Stay tuned for the next article on transparency and vision and don’t forget to subscribe to our newsletter.