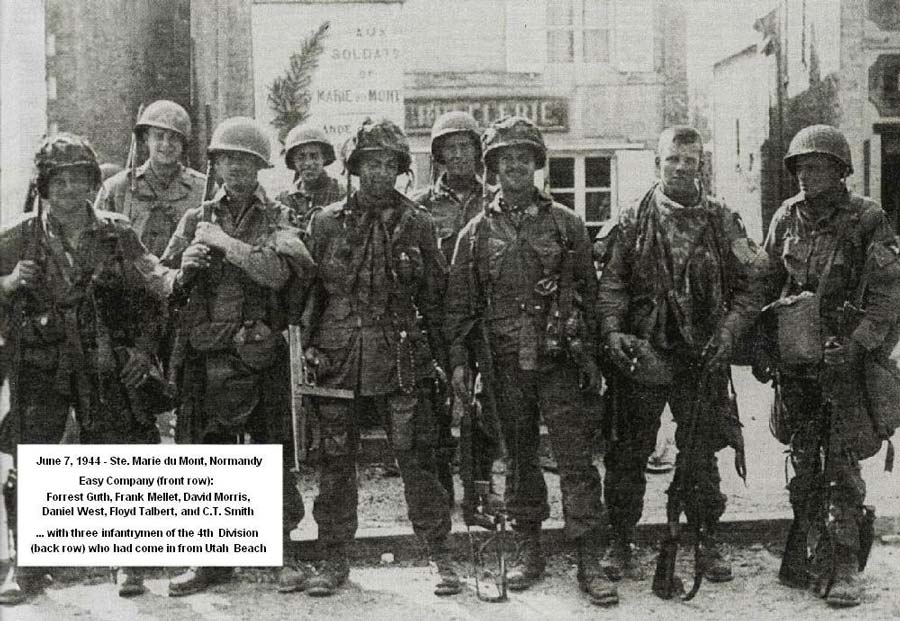 Leadership is no easy skill to learn. There are however a lot of people who are believed to or are claiming to have mastered that skill. Whether their expert status is deserved or not is unimportant here. This is because sometimes the circumstances are such that even the best of those experts are challenged to the extent and beyond their abilities to lead other people. The type of leadership that can overcome these situations I’d call heroic. I’m not talking here about lifting your team out of a productivity low or making it in a difficult business environment. I mean successfully dealing life and death situations where the responsibility and consequences of failure overwhelm even the best of men. Though such cases aren’t something we witness everyday there are still many that we can learn from.

One of the examples of such heroic displays of leadership are the actions of the famous ‘Easy’ Company, 2nd Battalion, 506 Parachute Infantry Regiment of the 101st Airborne Division in Nazi occupied France. Specifically, the actions of Lt. Richard Winters leading ‘Easy’ on an assault on the town of Carentan in the summer of 1944. This episode was depicted in the dramatic and thrilling scene in the highly acclaimed HBO miniseries ‘Band Of Brothers’. The series is based on an equally successful book going by the same title, written by Stephen E. Ambrose, which inspired this article.

The attack on Carentan was a soldier’s nightmare. The men from ‘Easy’ and other companies had spent the entire previous night getting to their assault positions. They arrived exhausted and barely on time. Due to the tight schedule there was no time to conduct proper reconnaissance. All the Allied troops knew was that they’re going to be facing elite German paratrooper regiments without artillery or air support.

The assault was to proceed along a road leading into town. The road presented a 100 m of downhill open terrain with only ditches running on both sides and nothing for cover. German troops had clear lines of fire through many windows in the town buildings facing this approach. However, no German activity was detected when the Allied troops were getting into positions. Things were too quite. Tensions were running high and the men from ‘Easy’ braced for what was to come.

At 6:00 am the first platoon moved down the road. The men made it half way as a German machine gun positioned in one of the windows opened up on them. The high rate of fire characteristic of German MGs immediately filled the air with a swarm of deadly projectiles. The bullets buzzed in the air as angry metal hornets and chewed up the road.

Faced with this onslaught the men in the front dashed towards the nearest buildings in order to escape the MG’s field of fire. However, the men in the back of the platoon jumped into the ditches to find whatever minimal cover they offered. The rest of the company, following close behind, took after the men in the front. Soon the majority of the attacking force was lying flat in the shallow ditches. The men pressed their faces into the ground desperately trying to escape the bullets buzzing ever closer.

Upon seeing his men in this extremely dangerous position Lt. Winters, the leader of ‘Easy’ company, took action. He ran to the middle of the road exposing himself to the relentless gunfire  but also making himself visible. He started shouting at his men “Move out! Move out!”.  This however, did nothing. The men did not react and the situation was growing desperate. The soldiers in the ditches did not have sufficient cover against the incoming fire. Also, the first few men from the company that made it past the MG barrage were now left on their own.

Winters knew they would be dead soon. Thus, in an inspiring and breathtaking act fueled by necessity and courage he dropped his gear and got to work. With only his rifle in hand he ran from side to side screaming “Get going!” over the cracking sound of bullets hitting the road. He screamed at his men and kicked them in their butts. As Winters later described it: “I was possessed. Nobody’d ever seen me like that.” His recollection continues: “I will never forget the surprise and fear on those faces looking up at me. The bullets kept snapping by and glancing off the road all around me.” Others remembered the situation similarly: “Everybody froze. Nobody could move. And Winters got up in the middle of the road and screamed ‘Come on! Move out! Now!’ “.

Finally, the spell broke and the men started moving. Winters described this moment later in a modest way: “Here is where the discipline paid off. The men got the message, and they moved out”. As the great leader that he was he attributed the success to the abilities of his men and not to himself. But everyone recognized his heroic actions for what they were. One of Winter’s men  – Sgt. Talbot wrote him after the war saying: “I’ll never forget seeing you in the middle of that road. You were my total inspiration. All my boys felt the same way.”

During the whole ordeal Winters was untouched by the German MG fire. Unwillingly, his actions created a distraction for the MG crew, who focused their attention of the officer darting from one side of the road to the other. This created an opportunity for the men in the front to silence the devastating fire. As the soldiers of the 101st proceeded under Winters’s leadership they took the first intersection and continued the difficult battle for Carentan. While Winters seemed bulletproof on the road he was later lightly wounded in the leg by a ricochet from a stray round.

Winters continued his exemplary leadership throughout the war and after to become a widely known and respected military officer. As an accomplished leader he authored several books on discipline and leadership inspiring future generation of similar men and women. His actions at Carentan became legendary and serve to this day as a benchmark for leadership, to which modern military and civilian leaders aspire.

Let’s break that down and see what can we use in our modern business environments.

As far as Winters knew that MG should’ve killed him. He also knew that unless action is taken a lot of his men would also die and the mission would probably fail. So, aware of his responsibilities he accepted the consequences and did what was necessary. Obviously, nobody expects the peace-time business leaders to lay their lives for their teams and missions as that’s not necessary. However, the thought of risking your career for the people you work with seems alien. In our disconnected business relations we are not as close to each other as the soldiers fighting for their lives. So granted, Winters’s act is tough to follow.

Don’t think it’s impossible, tough. We can follow his example in the business environment as well.

When your project is about to fall apart and your people can’t seem to save it, you need to act. Make yourself visible to your subordinates and superiors and take responsibility. Focus the ‘corporate fire’ that’s coming down on your team on yourself. Show them that success is just over the corner. Make them understand that they need to move. Defend your people fiercely when they come under scrutiny from higher-ups. Your rewarded will be with loyalty and the power of inspiration. With that you’ll be able to demand great deeds from your charges. But before any of this can happen ask yourself this: “How far am I willing to go for my people?”. Each of us needs to answer this question ourselves.

It is often counter-intuitive and difficult to accept but sometimes the best direction is forward. The men of the 101st at Carentan couldn’t stay in place and wither the MG fire. They couldn’t withdraw as the casualties they’d suffer during the retreat and leaving the men in front to their fate were unacceptable conditions. Onward was the only option they had left. Will this work always? No. This is where outstanding leaders and their experience shines.

When everyone thinks sitting in place, being passive and complacent is the best option despite it hurting the company. When the situation is so overwhelming that everyone is paralyzed. This is the moment, in which those heroic leaders need to step in. Through their superior knowledge, experience and initiative they are able to see what others can’t. And that is that moving forward is the best solutions there is even if it doesn’t seem so at the moment.

Winters was known as a calm and balanced leader. He didn’t ever raise his voice. So, when he started kicking people in their asses at Carentan and screaming his lungs out everybody noticed that he was out of character. This increased the severity of the situation greatly. Each of the the men of ‘Easy’ company knew that if Winters is like this then things are deadly serious. As a thought experiment, if Winters was to be agitated and scream at his men all the time, would his performance at Carentan be a surprise to anyone? “Well, we are in the shit and  the Lt is just as usual. No need to pay attention to him.”, I imagine the soldiers thinking.

Lessons for us? Know when to drive the intensity and when to relax. Keep the balance as not every issue is important but some are of the life-and-death kind.

In short, we have 3 major lessons to learn from this:

Some of these lessons are difficult to process and accept. That is because we often don’t appreciate what it means to be a true leader. People often strive to achieve a leadership position as a milestone in their careers. However, in their naivete they think that from now on their jobs will be much more easier. They are under the illusion that finally they will be able to delegate work to other people and relax themselves and reap the benefits. Have you experienced “leaders” like this?

There is nothing simple or relaxing about being a leader. In fact, if you gain a leadership position your job becomes much more difficult. Therefore, only people who are aware of these aspects of their new roles should become leaders. Otherwise, things will go south sooner or later and teams will fall apart. Fortunately, we have a multitude of examples from the past to learn from in order not to fuck this up. And the Leaderborn blog, of course.

If you want to learn these leadership skills be sure to subscribe to the WARBAND workshops. Take part in an exciting and inspiring training and become the leader you always wanted to be.